October 17th is Spreadsheet Day! Get a $50 credit if you sign up for a paid plan between now and the 17th.

Copied
Use this template 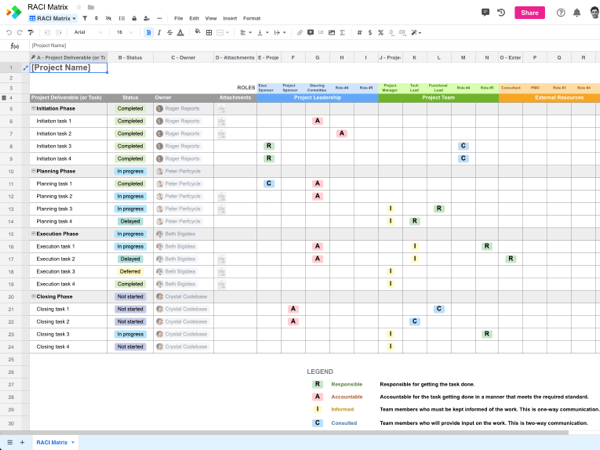 A RACI matrix is a simple, effective means for defining and documenting project roles and responsibilities. Assign RACI roles so each employee knows their role—and so the rest of your team knows everyone's role at each step of the process. No more asking, "Who was responsible for this?" It's all easily viewed in the RACI matrix template.

Your chances of project success are significantly improved when you know who is responsible, who is accountable, who needs to be consulted, and who must be kept informed at every step. And your whole team can view it online, with this free alternative to Excel RACI matrix spreadsheet. Did we mention it's free?

What is a RACI matrix template?

Complex projects often require multiple different people, involved to varying degrees, at different steps. Someone might be responsible for the design, and consulted on production. Someone else might be accountable for production, and need to be informed of marketing milestones. Someone else might be accountable for marketing, which means it's their fault if 2000 posters get printed with the embarrassing office party joke photo instead of the final product photo.

Making sure each person knows their role is precisely why a RACI chart is so important, clearly detailing for each task who has each of the four key roles:

Responsible: Responsible for actually getting the task done.
Accountable:  Accountable for making decisions and ensuring the task meets all required standards.
Consulted: Consulted about the work to offer their expertise and/or feedback.
Informed: Informed of progress on the task.

Don't wait for a problem to pop up to ask who is responsible and accountable for each task. Chart it out in advance with this RACI matrix template, so everyone knows.

Although RACI stands for Responsible, Accountable, Consulted, Informed, there is another way to think of the four RACI roles:

* Ready to Really buckle down and get Right to work, I've got energy drinks and two boxes of Raisin cookies, let's Rock and Roll.

* Anything goes wrong At All, it's my A… neck on the line here, so I'm going to review this a third time just to be Absolutely sure before I Approve it.

* Can I see how it's going? Just want to make a few suggestions, offer Constructive Criticism, maybe this Color Could be Cerulean instead of Cyan?

* I would Immensely appreciate If you tell me once this Is ready to go, so we can bring on some Interns to handle the Influx of Inbound traffic.

How does it work?

This simple RACI matrix template is designed to quickly clarify everyone's roles on your project without adding unnecessary details.

Enter each phase of your project as a parent task category (gray rows), with all relevant project deliverables and tasks as child rows.

Each task is assigned a Progress Status [[and an Owner]], and additional Attachments may also be added directly into the spreadsheet.

Separate columns are created for each role in your Project Leadership, Project Team, and External Resources. Each task is then assigned using the RACI classification, to indicate which roles are Responsible and Accountable for each task, and who needs to be Informed or Consulted.

Use the view options in the upper left-hand dropdown menu for Kanban views in columns. View by Status to get a quick look at which tasks are delayed and which are already completed.

Do I need a RACI matrix template?

That depends on how big and complicated your project is, and how many stakeholders it has.
For example, if you're going to go kill a vampire yourself, that wouldn't require any sort of spreadsheet, because you're literally the only stakeholder. If you've got a project of medium complexity with a small team of stakeholders, you're probably better off with a standard Product Launch Plan Template, where everyone can simply be assigned to the appropriate tasks and their progress can be easily tracked.

But if you've got a high-value, complicated project that involves a large number or even multiple teams of stakeholders, that's when a RACI chart spreadsheet comes in handy, to avoid confusion and miscommunication. Listing out your stakeholders and clarifying their level of involvement in each task ensures that each person understands not only their own obligations, but everyone else's role as well.

Without a RACI matrix, those roles are less clear, and you run the risk of people not understanding their role, or failing to consult or inform people who should have been looped in. Or in a panicked effort to avoid that, you overcorrect and have too many people offering input on every task, and overwhelm team members by consulting them on things they didn't need to be involved in.

In short, a RACI matrix may be overkill for small projects with small teams. But for the big, complicated projects that really matter, it's just the tool you need to maintain communication with all of your stakeholders and keep the right people in the loop every step of the way.

Who benefits from using a RACI matrix template?

Large organizations with so many team members that it is sometimes unclear who is responsible for things.

Organizations with complicated, long-term projects that are likely to involve multiple teams over time.

Organizations with projects that involve consulting a number of outside experts or getting a large number of approvals. 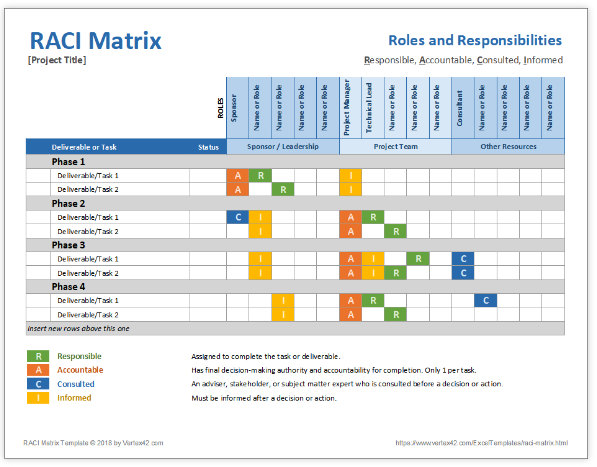 Is there a RACI template Excel option?

Yes, Virginia, there is a RACI template in Excel. When it comes down to it, the RACI chart template Excel version is very similar to our online RACI matrix spreadsheet. Both will help you to clarify the roles of your team across various tasks in your project. We've done our best to make our template as convenient as possible. Not only is it online, but each task can be tagged with an Owner, so any team member can immediately see a Kanban stack of all their tasks. But if you're the only one using the spreadsheet and don't need the convenience of having it bookmarked online, an Excel template might work fine for you. Here's a simple RACI matrix in Excel example template.

More templates like this one
Project Management
Explore all → 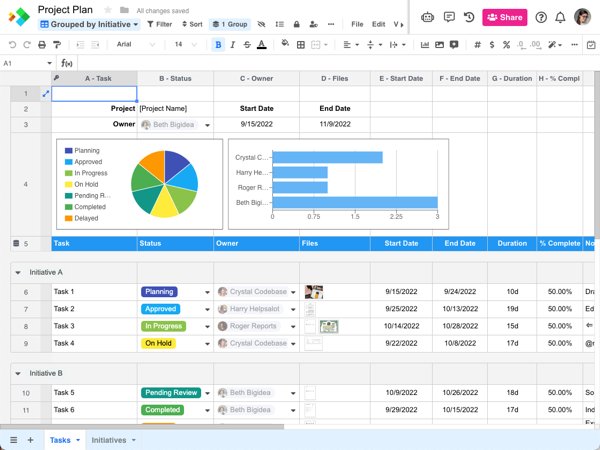 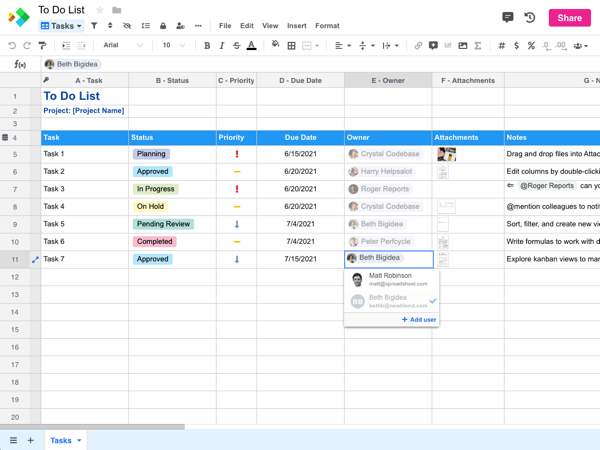 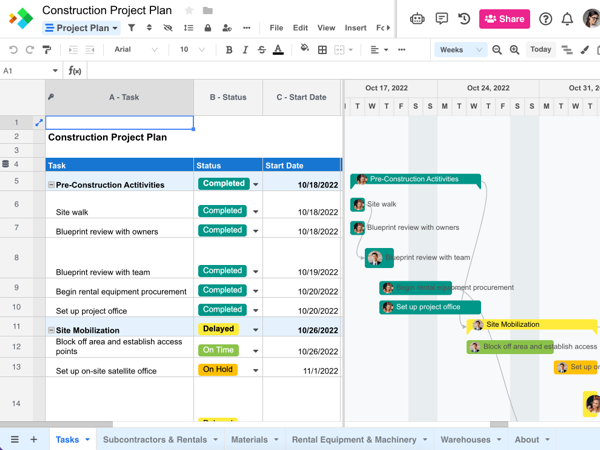 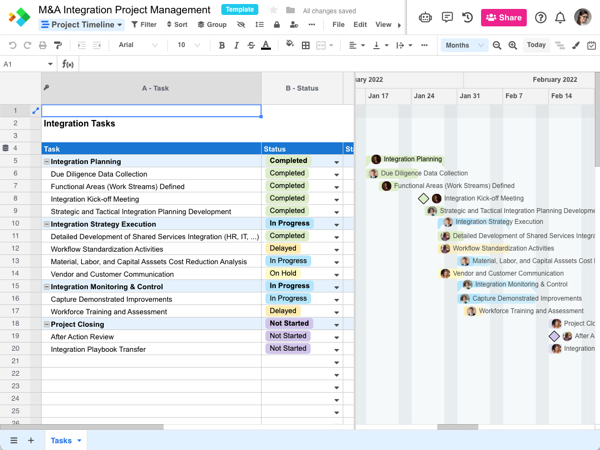 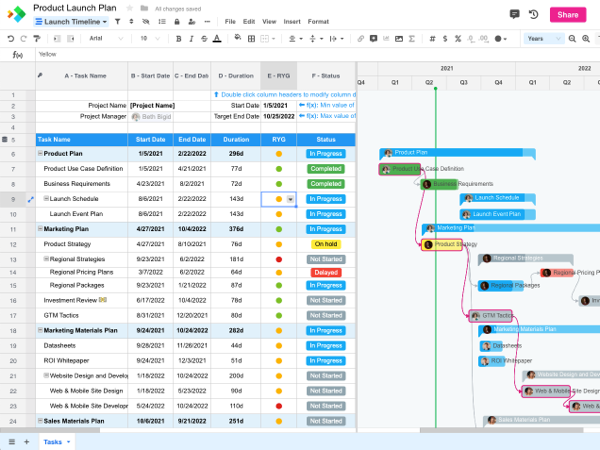 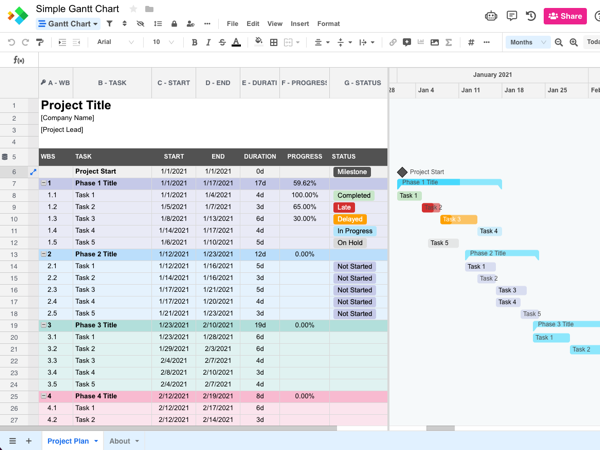 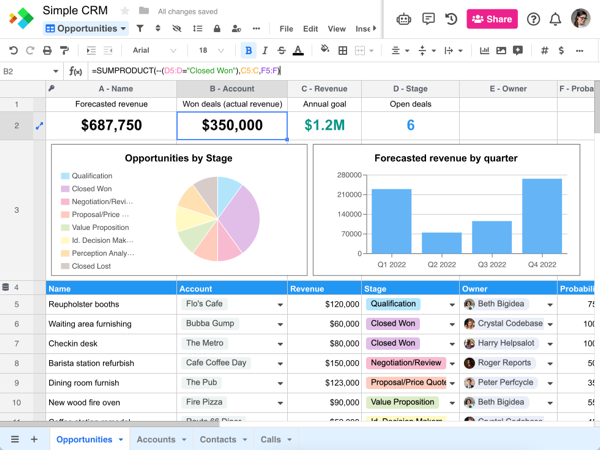 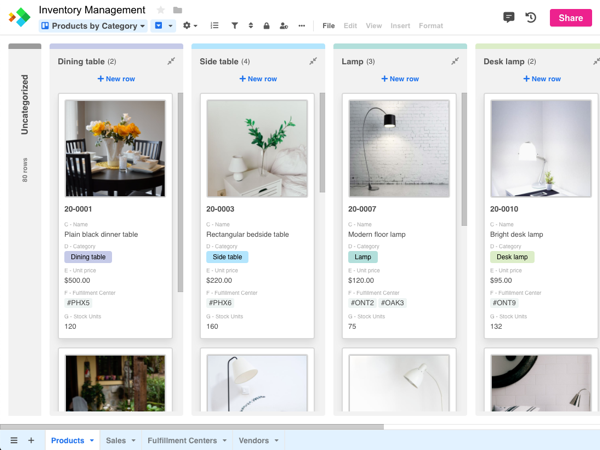 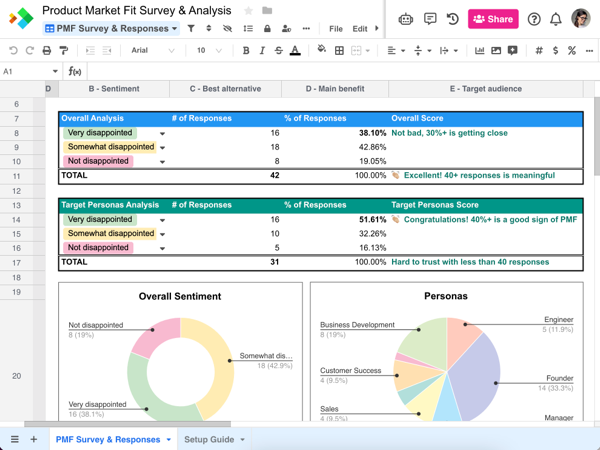 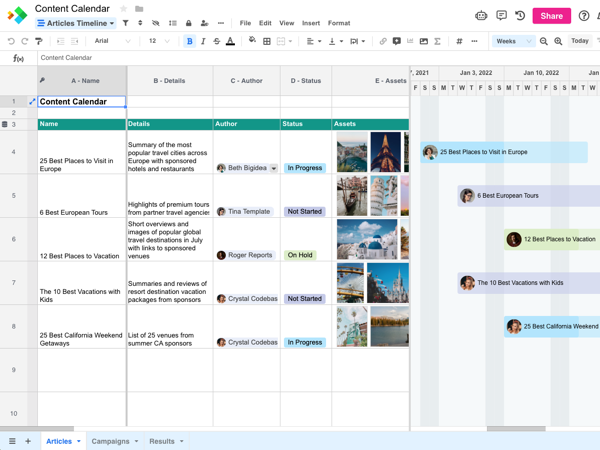